As mentioned in my last post, when I was first diagnosed with epilepsy I was urged by doctors and specialists to stop my path toward becoming a professional dancer. But what they didn’t realize is that I had been dancing for twenty years and you don’t just tell a dancer that they can’t dance anymore. That is why, as soon as I felt my health was a bit under control and I was better able to recognize the warning signs of seizures and auras, I got right back into dancing. Yes, I had to do this from the safety of my hometown, where my family could be there at a moment’s notice, rather than in NYC or traveling the world as I had originally pictured myself but I was able to dance again and that was really all that mattered.
My first two years back in the dance world I was blessed with the opportunities to tap dance as Columbia in a live performance of The Rocky Horror Picture Show, to become a member of two of Maine’s most respected modern dance companies, Collective Motion and Sonar Dance and to even join a kickline of dancing Santas in the state’s most celebrated holiday spectacular The Magic of Christmas at Portland’s largest theater, Merrill Auditorium. 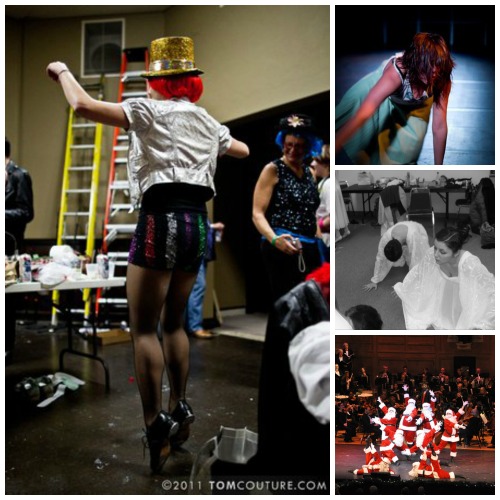 The year after my performances as Columbia and Dancing Santa #4, I was honored to be named Portland’s Best Dance Performer by The Portland Phoenix, one of the city’s most respected arts and entertainment publications. So, not only can people with epilepsy be dancers but we can win titles for it too!

Maybe dancing isn’t your thing but there’s something else you would like to win a title for… Best Dog Trainer, Best Puppeteer, Best Kindergarten Teacher. Whatever it is, if you can dream it, you can be it. Don’t let epilepsy get in your way.

2 thoughts on “People With Epilepsy CAN Be Dancers”